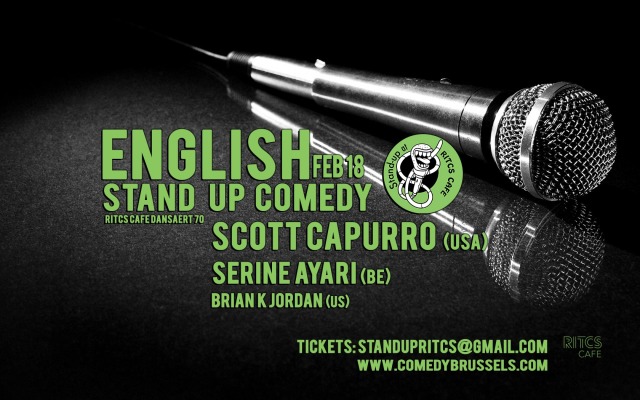 🔥Scott Capurro:
Camp and outrageous, provocative and controversial, catty and hysterical, Scott Capurro is a breath of fresh air in the increasingly samey and stale world of stand-up. Not for the faint-hearted, Scott’s un-comprising take on his gay lifestyle and white trash background make him as challenging as he is funny. A Perrier Award Winner comedian and actor who played a part in one of our most and one of our least favourite movies of all time: “Ms Doubtfire” and “Star Wars: The phantom menace”

“The most fearless and technically perfect stand up on the circuit.” – The Guardian

🔥Serine Ayari:
Her comedy career took off big-time last year. She was one of the discoveries during ‘Level Up’ in the Bourla Theatre, opened for the American comedian Andrew Schulz in Amsterdam and was one of the ‘New Talents of Gotham Comedy Club’ in New York. A stellar debut, that’s what we call it.

🔥Brian Jordan
is quickly becoming the name to know in comedy. He has a unique, laid back style combined with an old school (read outdated) take on life. He has performed throughout Europe and North America at legendary places such as Yuk Yuk’s, Laughing Skull Lounge, and Standup Antwerp, as well as many comedy festivals including the Utrecht Comedy Festival, Lund International Comedy Festival, and many more.

As usual you can book tickets by mailing us: standuprits@gmail.com or through our website www.comedybrussels.com Pre-sale: 13 €, on the door 16€, students 6€ RITCS café – Dansaertstraat 70 – Tuesday Februari 18 – Start 20h doors 19h