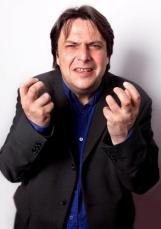 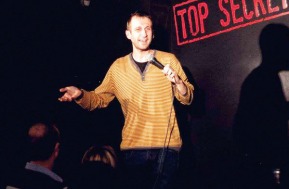 We have another great line-up with two of London’s best club comics planned for you . So save yourself a trip to the U.K. and come to the RITCS café for a wonderful comedy show. Send us an email or reserve your seat on www.comedybrussels.com  if you want to join us on tuesday March 19 for a fun night out and some of the best beers Belgium has to offer.

Award-winning Scottish comedian and writer. He is a co-writer on Alistair McGowan’s Big Impression, and a former winner of Channel 4’s So You Think You’re Funny competition. A master of acutely observed character monologues, combining the sinister and surreal with brilliant sardonic wit.

Romanian comedian who started comedy in 2006 in Bucharest. In 2013 he switched to doing comedy in English to make himself understood by the Los Angeles audiences. In 2015 he moved to London and after some BBC appearances, he became a professional comedian on the UK circuit with shows at the Comedy Store, Top Secret and Hot Water comedy club.

🎤Yunes Hama
This months opener is the talented Yunes, a confident new voice in comedy

As usual you can book tickets by mailing us: standuprits@gmail.com or through our website www.comedybrussels.comPre-sale: 12 €, at the door 15€, students 5€ RITCS café – Dansaertstraat 70 – Tuesday March 19- Start 20h